Love slam fire? Then pick Nerf Rival Artemis for fun. You can fire tons of rounds just by holding the trigger and pumping the handle in a short time. Trust me, Artemis is a beast Nerf gun compared to others.

In this review, you will have clear information about the toy gun and how Hasbro is doing a great job by introducing the Nerf in a new way in every edition.

In this Nerf gun, you will have to use Nerf balls instead of darts. The gun is spring powered and comes with the capacity to load 30 rounds.

Let’s have a glance at other details below of the features, performance, and alternatives. 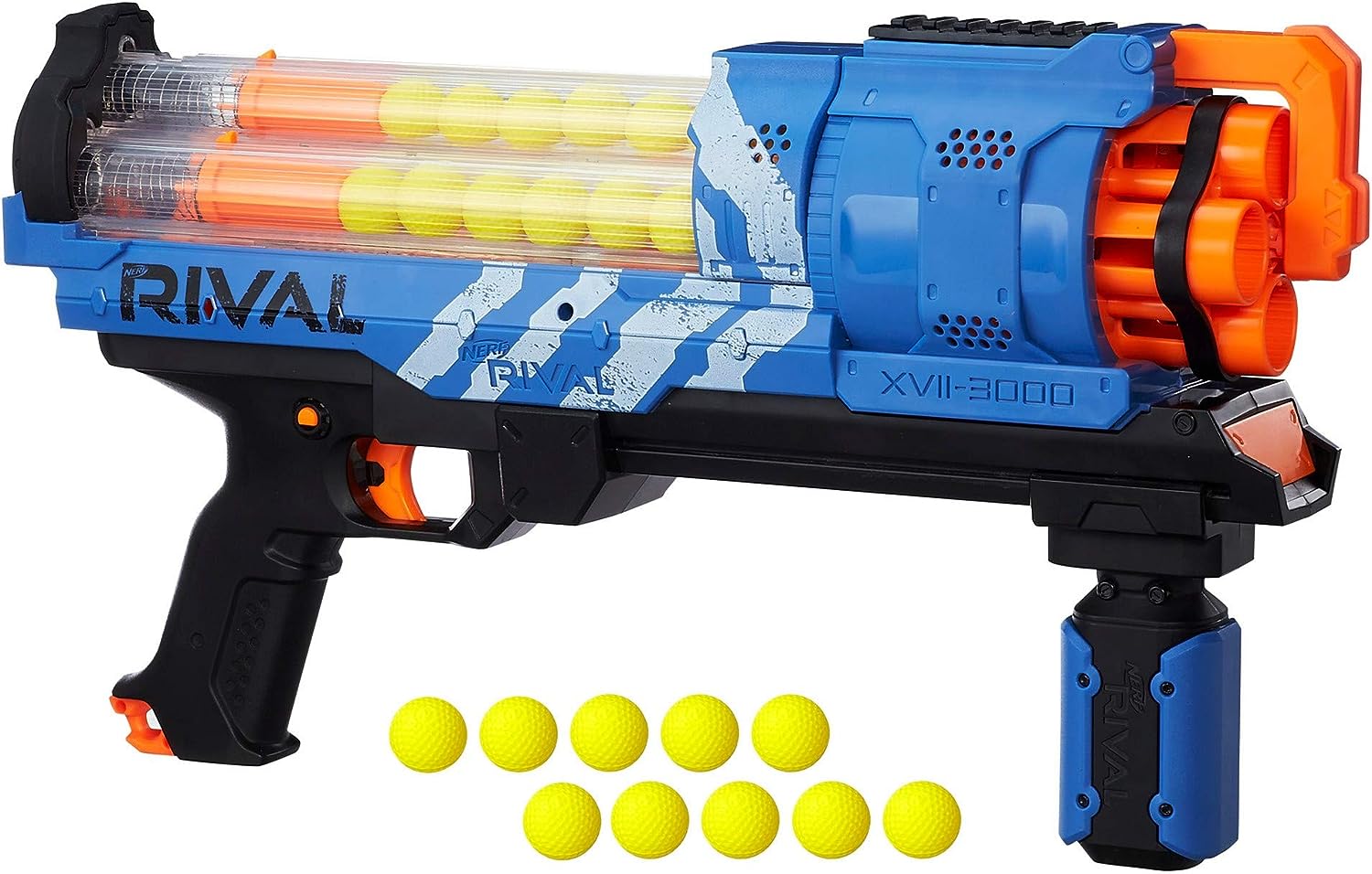 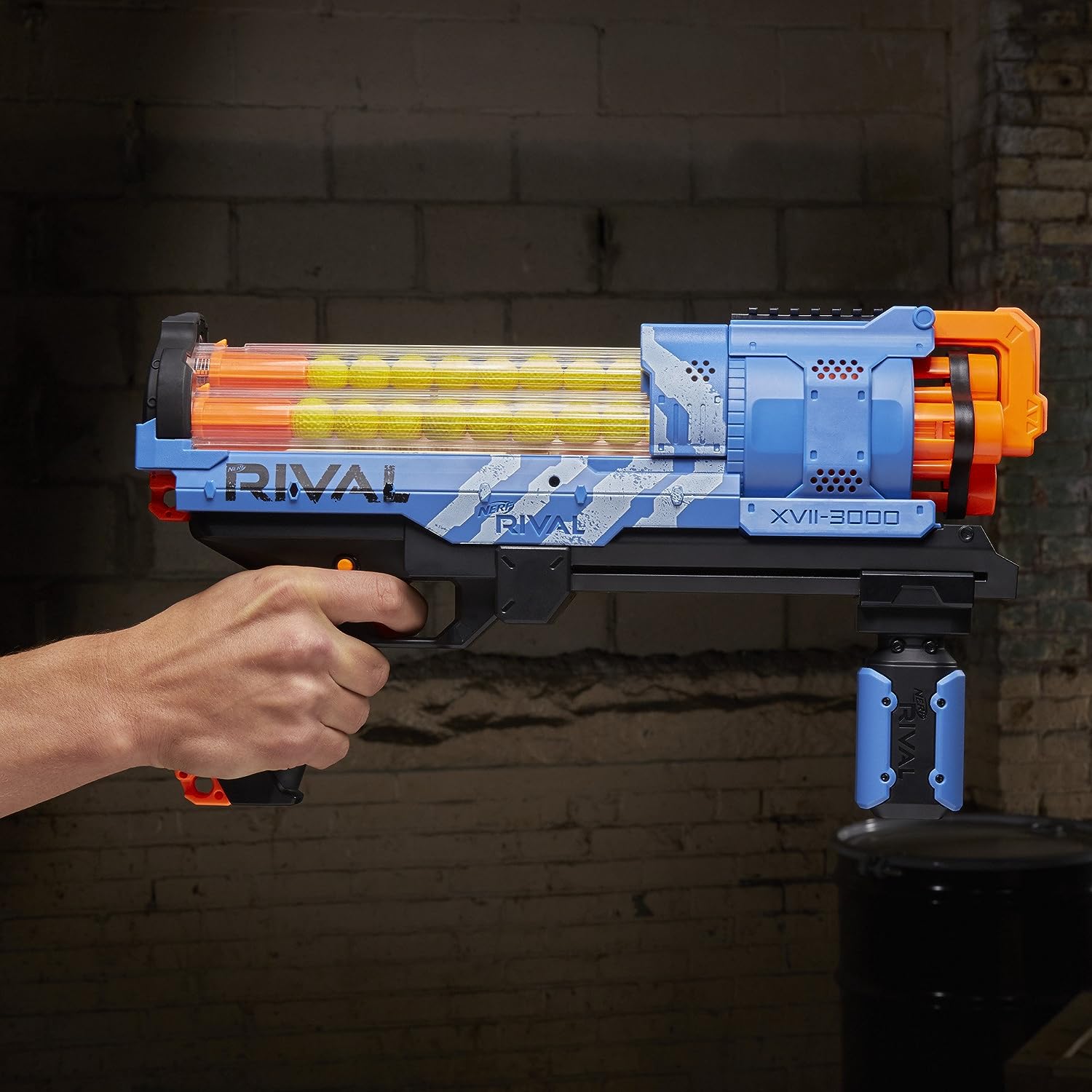 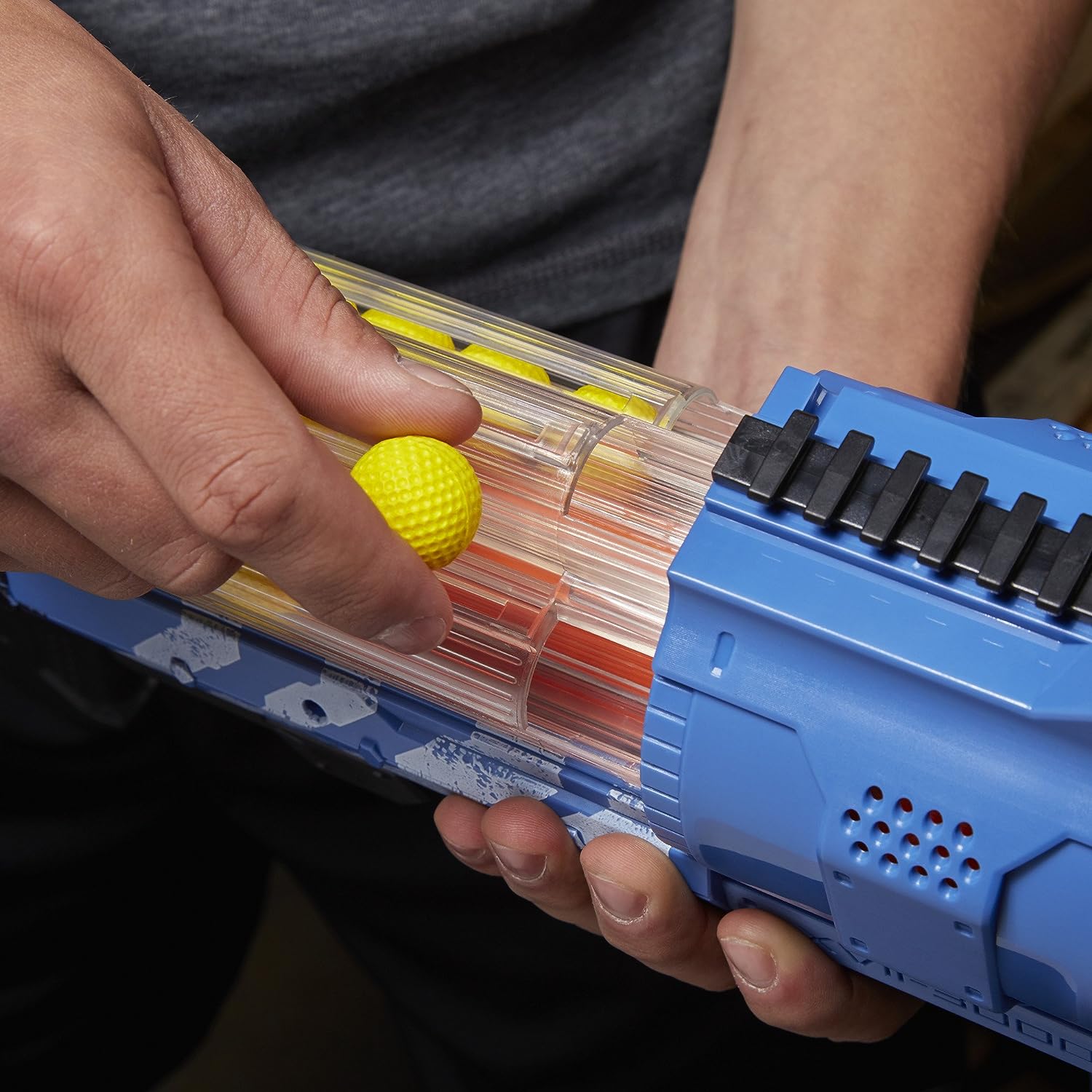 Rival Artemis is the fifth blaster that has the ancient name. This toy gun is in the second position in ability, the capacity of the 3 parallel integrated magazines is 30 rounds.

Don’t get fooled by the size; it is easy to load and cock. The spring-powered mechanism makes the Rival Artemis easy to carry and fight for a long time.

Slam fire is the big reason that Nerf lovers love it.

Before going to an in-depth review, let’s talk about this toy gun’s naming.

The release date of Nerf Rival Artemis was in 2017, then came the Nemesis MXVII-10K and the Hera MXVII-1200 later.

What Is In The Box?

When you unbox the blaster box, you will get the Artemis gun; high impact 30 rounds, and user instruction. This blaster doesn’t require any batteries and magazines, so you can pick, load, and start shooting with this blaster right away.

While unboxing, you can see that this gun comes with a fully assembled design, and it is not the same as the other guns. This strong Nerf gun is recommended for kids from the age of 14+.

The spring-powered stumpy gun comes with a fat fill in the handle, and at the front, there is pump-action raising.

The nose of the blaster comes with four barrels from where you can shoot powerful rival rounds. You can fire the foam balls one at a time and the barrel rotates to let you fire.

Though the toy gun comes with a funny fat look, you can pick the color you prefer as the blaster comes in red and blue. You and your best friend can choose two colors to play in different teams and exchange later if you get bored with your color.

The plastic tubes, known as the ammo feed tool, are not the same as other blasters. Most of the blasters come with an attachable magazine or rotating cylinder where you can load the darts or rounds.

But this Rival blaster comes with an integrated and attached magazine that comes with the capacity holding 30 rounds.

The three white clear plastic tubes can get access by sliding the cover section. The springs get compressed by sliding back, and you can load the rounds in the loading chamber.

You can comfortably hold this big fat guy as the grip is comfortable and a good fit. If you are right handy, no worries like gun grip are ambidextrous and easy reach to the two-way safety catch.

When you prime the Artemis blaster, the barrels rotate and let you shoot the next ball. You will find an indicator to let you know whether the Nerf blaster cocked or not.

If you want to go for an Artemis mod, you can try as the toy gun comes with a tactical rail on the gun top. You can use a red dot sight and flashlight on this blaster.

In the Nerf Rival Artemis xvii-3000 blue, loading and firing the foam rounds are the most important part.

All you have to do is slide back to the top sector, pop the rounds in the tubes – remember you can push in 10 rounds in each tube, and you can load 30 rounds in the ammo magazine.

The tubes let the rounds go in easy, but you can stay relaxed once the rounds are in, as the balls never go out until you shoot them out. So, while loading, just put in the balls without any force.

After finishing loading the rounds, pull back and forward the priming handle and shoot. The chunky handle is smooth to use while shooting.

The four barrels in the front rotate every priming and the spring in the magazine pushes the foam balls forward once the place is emptied.

The tube rotating starts from the right, then the center, and lastly, the left one. When the tubes get empty, you may face the dry fire. To avoid this, you can fill two rounds in each tube.

If you have just switched to firing rounds from the blaster, dude, you will enjoy this slam fire. Hold the trigger, pump the priming handle, and shoot the foam balls at high speed.

These shoots are great in a small space because it will take minutes to defeat your opponent with bounces and foam balls’ speed.

The firing range is way better than any other gun. You don’t need to aim your target from long distances as it will reach the target just like an arrow shot from the longbow.

And you will not ever face the jam with this blaster, which is for the foam balls. These balls are durable and spongy.

In the trigger, there is a safety button that prevents unintentional firing. Once you prime the Nerf Rival, the priming indicator goes on.

If you are in the field with two other Nerf guns, then you can hang this blaster as it comes with two sling supports.

In this section, I will talk about the alternatives of the Rival Artemis xvii-3000 blaster. Go through the reviews and make a decision about which one to pick. 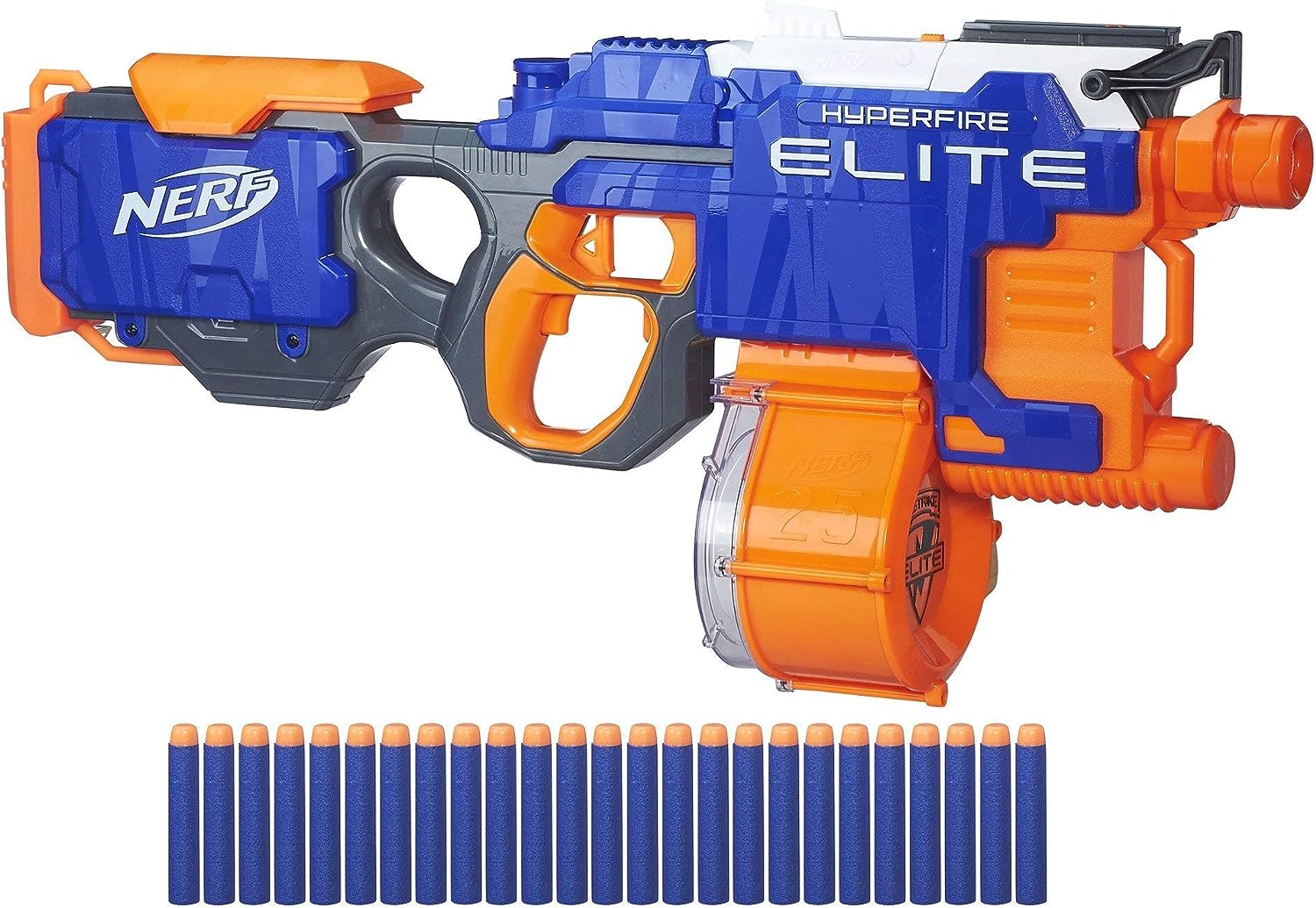 Nerf Rival Phantom Corps Hades XVIII-6000 is a spring-powered pump-action slam fire that enables gun. This toy gun has the capacity to load 60 rounds in the built-in magazine.

In the front, there is a sling attachment, and the muzzle has four barrels. The barrels rotate while shooting.

You can push and pull back the priming handle before shooting the rounds. The tactical rails are two types. One is attached to the top, and the other one is connected to the slider.

By pushing the slider back, you can release the tension in the rounds.

There are no iron sights in this blaster. You have to pull the slider in the back to get access to the ammo door to load the rounds in the magazines.

The built-in magazine comes with 320 round capacity tubes. You have to load rounds in each tube independently.

There is an unjamming button. When you face jam, then use the button.

When you prime the gun once, you have to wait for the next priming after pulling the trigger. There is a safety button that prevents accidental shootings. The trigger comes with a slam fire that ensures powerful performance in battle.

The grip is comfortable to hold, and the priming indicator tells you to shoot when you are ready.

Nerf Rival Hera Mxvii 1200 White Combat blaster is a Phantom Corps series. The phantom series comes in white only. This toy gun comes with a battery-powered feature along with a flywheel operated magazine.

You will find similarity between the Zeus editions, but the Hera is powerful in the configuration. The magazine is compatible with a Rival rechargeable battery pack.

With the gun, you will get a 12 round magazine with Rival rounds. You will get a red and blue flag indicator that can be attached to the blaster to play in teams.

The front part is a Rival blaster with a chunky design.  On the top, there is a front iron sight and tactical rail with an integrated access door.

The grip of this Nerf blaster is the largest one. Right under the grip, the magazine is attached. You can pull out the magazine, just clicking the magazine catch.

The blaster is a single semi-auto fire, and the trigger allows a crisp feeling while firing.

Target with the Nerf Rival Apollo XV-700 and enjoy the intensity of accuracy in battling. You have to use foam rounds instead of darts in this gun.

In the front, the orange muzzle comes in a neat design. There is a tactical rail on the top to attach Nerf accessories.

The priming handle is on the top. You have to pull back and push the handle to shoot. The trigger is smooth to shoot, and there is a trigger lock button.

The grip is long and comfortable to hold. At the bottom of the grip, you can install the magazine that comes with the capacity of 7 rounds.

There is a priming indicator on the back of the gun that tells you to shoot when the toy gun is ready.

Artemis was the God of the hunting and moon. Her rival list is long – Hera, Orion, Aphrodite, Callisto, Actaeon, Agamemnon, and Niobe. Artemis hated Aphrodite the most as Artemis hated to love, and Aphrodite was the total opposite.

2. Why are Nerf Rival guns named after Greek gods?

This is the Rival line of blaster as this Rival was designed for older teens who like bigger guns with strong hits. The average Nerf guns fire rate is 70 fps, whereas the Rival Artemis fires at 100 fps.
By giving the name of gods, Hasbro may want to mark these Rival guns as Nerf gods. The regular blaster is named like “demolisher,” Regulator.” So, giving new god names makes the series special and unique.

To reload the Nerf Rival’s integrated magazine, you have to slide the cover to the back that exposes the magazine’s opening door. Through that door, you can load the rounds in the magazine. The magazine has three holes that allow it to load in three different tubes.
After loading, slide the cover back to the original place. Release the trigger lock and prime the gun with the handle.

4. How far does the Nerf Artemis shoot?

When you will prime the Artemis, the barrel rotates like a Ferris wheel and the magazine pushes the yellow balls forward to shoot. The velocity of the Artemis is 100 feet in one second, or you can say 30 meters in one second.

No, the Nerf rival Artemis doesn’t need batteries as it is a spring-powered blaster. So you don’t have to think about placing batteries by unscrewing or removing any parts.  You have to load up and start shooting.

This Nerf rival Artemis review will help you own the all-rounder blaster from the Nerf rival series. Careful about giving this Nerf gun to kids as it is recommended for 14+ age.

As it is spring powered, so you will not have to think about getting a new battery after every play.