Does the name “Kronos” seem familiar? If you are a Greek mythology lover, then yes, you’ve guessed perfectly. Kronos is named after the great Titan king Cronus.

The king was known for power and destructive nature. According to this Mythology, Manufacture Design Nerf Rival Kronos is lightweight and powerful enough to get a great nerf war.

With Nerf rival Kronos XVIII-500 blaster, you can go for a team battle like team Phantom corps, team Red and team Blue. You will find the color blasters separately. Select your preferred color, and blast in the battle. 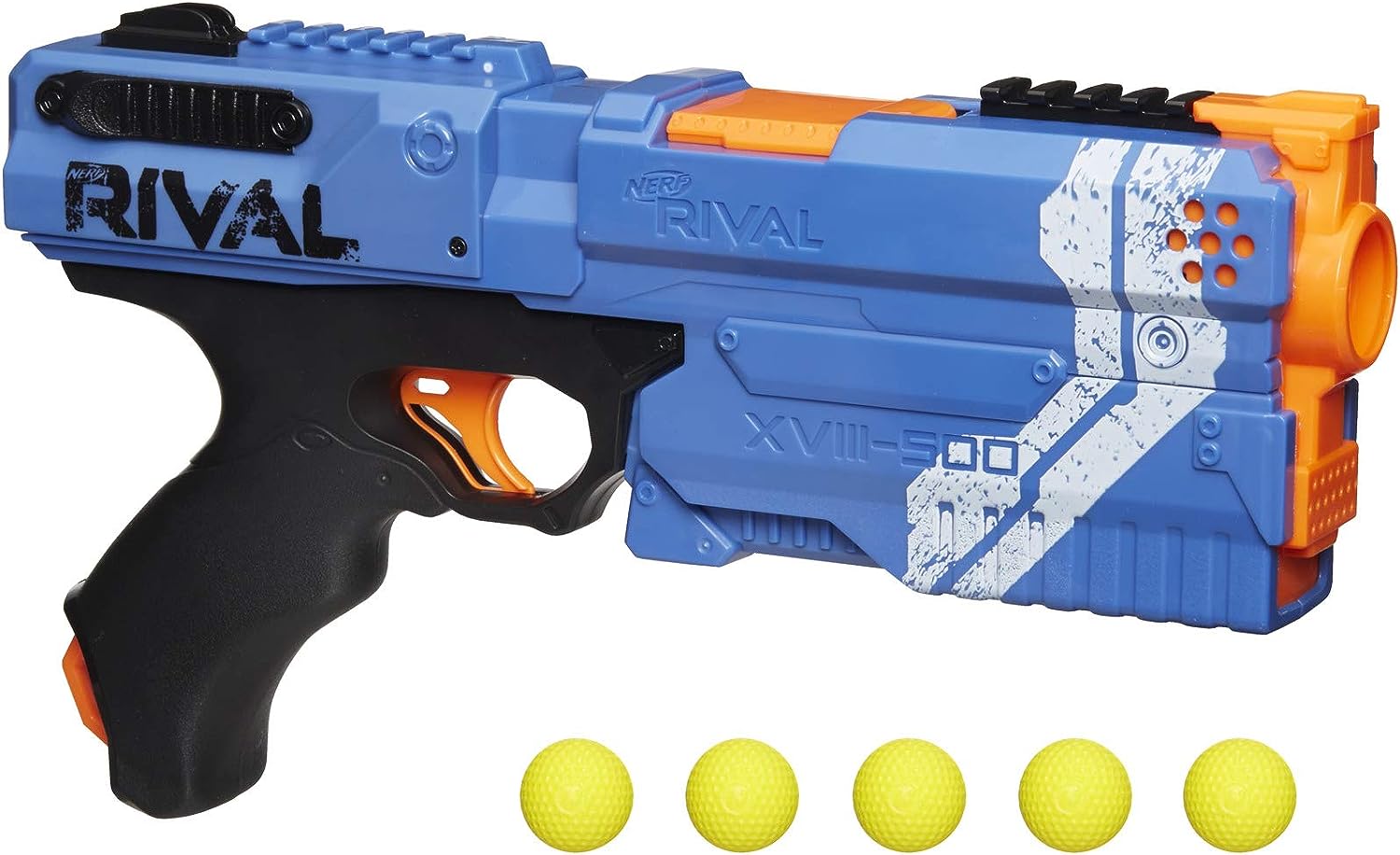 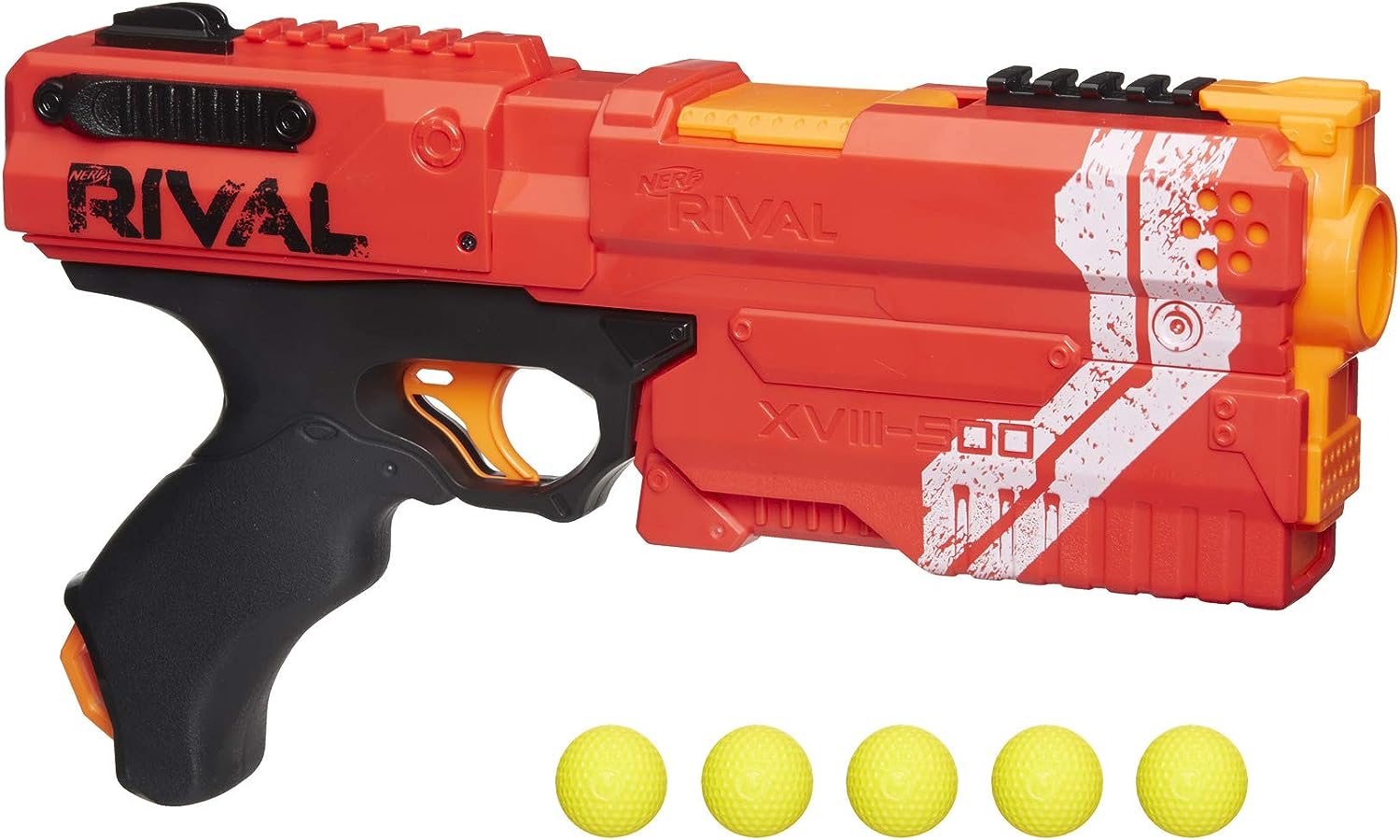 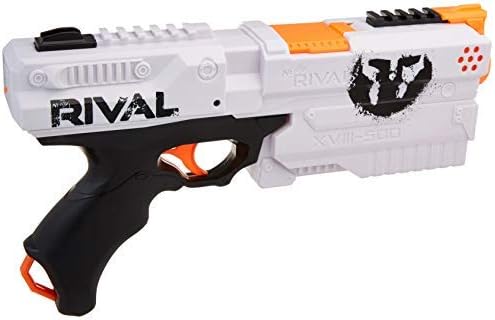 To dominate your Nerf battle, you have to own the rival Kronos XVIII- 500 for sure. It has an integrated magazine that comes with a curved design.

Though I believe, Nerf is for all, but the rival series is rated as 14+. It is up to the parents’ choice to let the kids know this one or the traditional Nerf guns.

This gun has the same design as a pistol. So for a starter, this design is user friendly. This gun allows you to hit five targets in a row.

Is The Nerf Kronos Good- What Do You Think?

You will find two variations in the Kronos rival series – one is the Deadpool, and the other one is outdoor blaster. But there is no significant difference between the two variants.

The rival series first released as the nerf rival Kronos Deadpool (red and blue) in 2017 and nerf rival Kronos outdoor blaster in 2018. These guns come with high impact features and allow a five-round shoot in a war.

This is one of the best rival gun which lets you have a battle in a team and it is fun to fight among the teams. To make the team easy to distribute, you will get blue and red flags.

The trigger lock is designed to prevent accidental fires. The blaster will tell you to fight with the ready indicator.

The tactical rail allows you to use any type of Nerf accessories and gear.

So you can tell the Cronus name itself fits with this small and cheap powerful Rival blaster yet.

Before picking this blaster, you have to know about the features to help you in your picking process. Let’s look at the main features of this wonderful blaster:

After loading prime, the breech with the elevating mechanism comes with spring action. When the blaster is geared up, the ready indicator will indicate you to shoot. You can fire in speed at 90 feet in a second.

The compact size of the blaster lets the player move fast and shoot with focus. The safe trigger lock will stop the accidental fire while running at the battle time.

With the tactical rail, you can attach different rival gear to customize the toy weapon to boost your game tactics.

While unboxing the blaster, you will get blue and red flags for team play. Players can use the different colored  flags per team they play with. You can attach the flag in your gun or on your arm.

This Kronos blaster gives a lifetime intense experience among the players. With skill and spring action gun, the Nerf battle gives you an enjoyable time cherished in your memory for long years.

The range of this blaster is more rigid than other Nerf guns range. But to be honest, the extra 15 fps doesn’t make any difference while shooting. Aiming with this gun is accurate. But you have to prime the gun by lowering the aim. 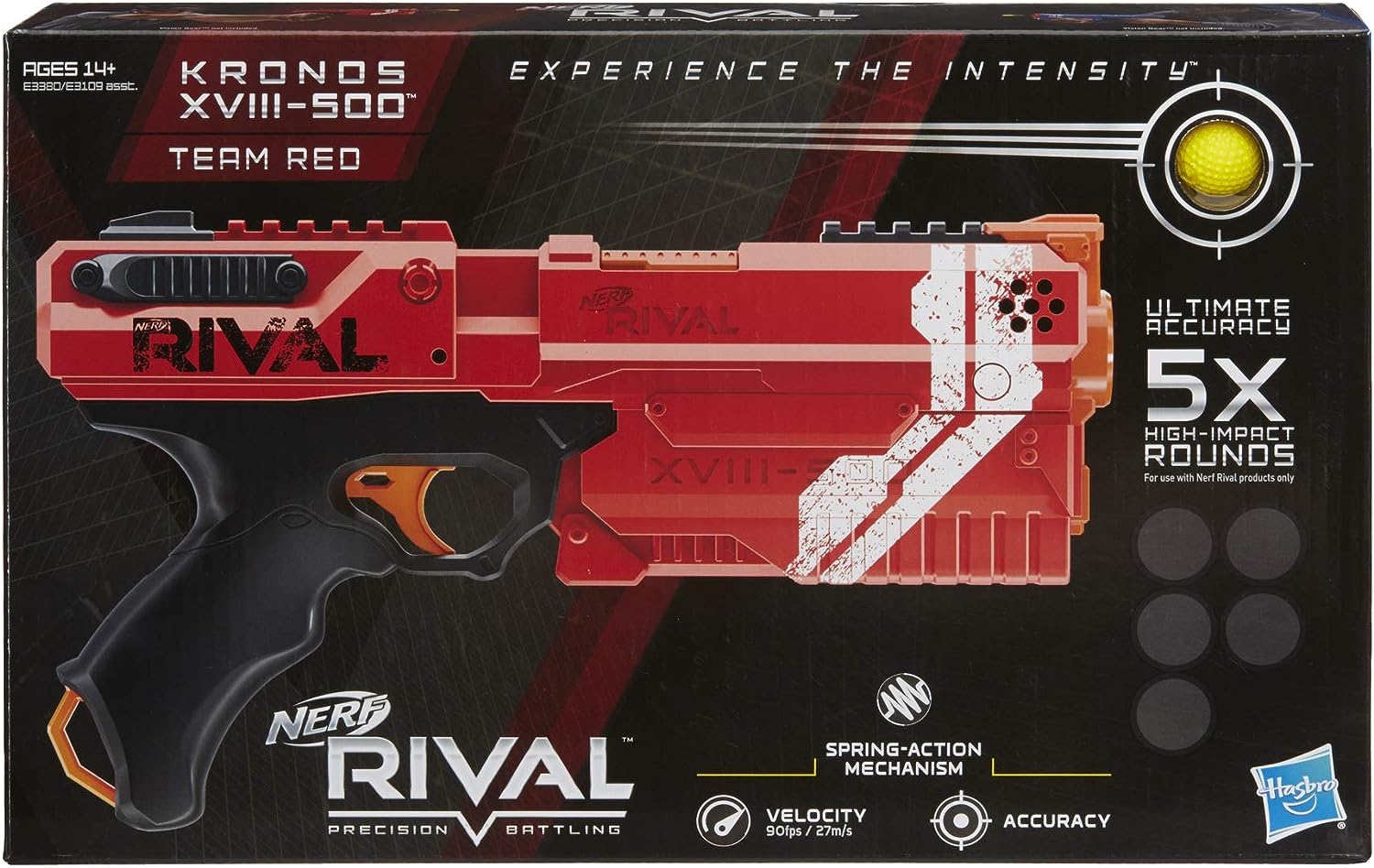 You can load five rounds in this gun through the door. To open the door, you have to pull back the fill in the handle and load the rounds in it. You can do the load with a speed loader also.

After loading the rounds, close, slide, and shoot. The priming action is smooth, light, and slick to use for shooting.

The grip in the slide back makes it easy to hold and push after loading rounds. The ready indicator alerts you when your gun is unloaded or overloaded.

What is the velocity for a Nerf Rival Kronos?

You can fire at the velocity of 90 feet in a second. At this speed, the Nerf balls get squeezed and shoot at great speed. But they don’t hurt as much as the darts.

How do you load?

To load Kronos, you have to prime the blaster. For priming, you will get access to the magazine door. Now open the door and push in the five rival rounds as it is the blaster’s capacity.
After finishing the loading, shut the tab and close the slide. You are ready to shoot.

How do you use Nerf Rival Kronos?

To use this gun, at first, you have to prime it. After getting the magazine door access, load the five rounds. Then push back the slide. Aim the gun to the target and pull the trigger. Now shoot until your gun requires further loading.

What is the FPS of Kronos?

The FPS of the nerf rival Kronos is 90 FPS, which is 27 in meters. When you are in woods, this FPS allows a good fight as this speed helps to lose your opponent.

How many shots does Kronos hold?

The Kronos blaster holds up to five powerful rounds to shoot. The internal magazine comes with a curved space where the rounds can be pushed in the chamber by the twisting spring mechanism.

How to fix Nerf Kronos Rival?

If you feel the Rival Kronos slide stuck, then don’t panic. In the back of the gun, you will find a little orange switch. Cock the switchback, and your slide will get free. Sometimes you need to prime the toy weapon fully to avoid the slide stuck.

How to unjam a nerf rival Kronos?

Jamming of Rival Kronos is not a common thing . If you don’t prime  properly, then you may face the jam situation. Slide down the orange button in the back; your gun will be unjammed.

How does the Kronos work?

You have to open the breech, and load 5 Nerf balls in the blaster. Prime it, aim and fire. This pistol sends the foam balls at 90 feet in one second. Aiming with this toy gun is easy and accurate.

Where can I buy Kronos ?

You will find this toy gun in every e-commerce based website like Amazon, eBay, and Hasbro. It is available on these websites. All you have to do is pick, add to the cart and buy online.

This Nerf Rival Kronos review has represented the fine blasters that are simple yet, powerful to blast only by priming, loading, and shooting. The look of this series blaster is unique and top-notch.

If you compare the Kronos Deadpool and the Phantom Corps, then it differs in price only. For kids, use eye protection as the blaster shoots hard. If you have kids, enjoy the battle as a team with tagging red and blue flags in the Kronos blaster.

However, there are other blasters in this series. After reading this Nerf Ultra One review, you might be interested to start with the first one from them. Then grab your weapon and be ready for the battlefield. Let the darts fly over aloft with its pretty agility.